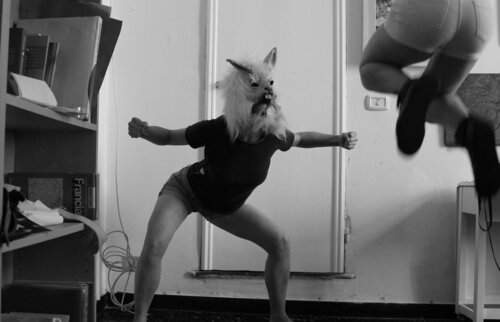 Chiara Taviani is a performer, dancer and choreographer. She began her first classical dance studies in Munich and later in the Spid Academy training course in Milano. Later she follows the professional course for contemporary interpreters Coline in Istres, where she collaborates with several choreographers, including: Emmanuel Gat, Edmond Russo, Shlomi Tuizer, Mathilde Monnier. In 2010 she starts collaborating with Michela Lucenti's Balletto Civile. In 2011 she founded the C&C company with Carlo Massari, which received numerous awards and recognitions. In 2016 she created the solo Peurbleue and with C&C the 3tracks4 format in collaboration with the artists Marion Alzieu (Fr) and Ayala Frenkel (Il).

Giselda Ranieri. With a classical and contemporary background, Giselda is mastered in Dance Studies at Alma Mater Studiorum of Bologna. She has been researching in instant composition since She's one of the founding members of UBIdanza/Aline Nari and Davide Frangioni. ALDES Associated artist since 2015, she collaborates with the company since 2010. She collaborates with the Romanian choreographer Cosmin Manolescu for the 5 years (European project E-Motional: rethinking dance; European tour of Fragile). Her participatory project HO(ME) in partnership with the Italian-Tunisian collective Corps Citoyen is hosted in Malta for "Valletta Capital of European Culture 2018”; Best direction prize at the ACT Festival in Bilbao for i...i...io?! / Give me a moment. Her solo T.I.N.A. (There Is NO Alternative) won Supernova (Pergine) and has been selected by the Anticorpi XL Network. With RE_PLAY (2020-21) she’s artist in residence for ResiDance in partnership with Lavanderia a Vapore/Piemonte dal Vivo, Teatro Comunale di Vicenza (TCVI), AMAT, Passo Nord (Laives). IsaDora - The TiK Tok Dance Project, in collaboration with social media manager Simone Pacini, won the Residenze Digitali national call.