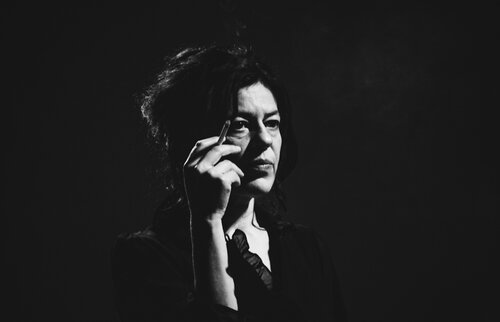 Two men, old friends since their teenage days, meet by chance after years without seeing each other. Jordi holds an important position in the politics of his city; Walter ekes out a living at a job that does not fulfil him; he feels lost and a failure and he needs help. Asking is very difficult; helping is too. One acts as a mirror for the other. Frustration, resentment, social pressure and a large helping of contained violence. The two men will enter into a dizzying dialectic, brimming with repressed plans and desires.
In the background, the memory of the past, the melancholy of lost youth, of a time when people believed everything was possible, the political transition, the “decade of change”, la movida, The Cure...

Milena Costanzo, actress and director, has worked for many years with Giorgio Barberio Corsetti, Claudio Morganti, Alfonso Santagata, Stephan Braunshweig, Roberto Bacci, Anton Milienin. In 2011 she won the Ubu Award with Lucido, signed with Roberto Rustioni. Since 2012 she has continued her research working on the Sexton-Dickinson-Weil trilogy.

Victoria Szpunberg Playwright and teacher of drama at the Institut del Teatre and at the Escola Superior de Coreografia de Barcelona. In the year 2000, she was invited to take up an International Residency at the Royal Court Theatre with her first play. Since then, her works have premiered at different national and international festivals and theatres. Besides her career as an author, she has collaborated with different choreographers, signed dramatic productions and theatre adaptations, worked as a director and written plays for the radio and sound installations. She has also participated in Theatre and Education projects and is a collaborator of the Patothom school for social theatre. Highlights among her works include Entre aquí y allá (Lo que dura un paseo), L’aparador (Teatre Nacional de Catalunya, 2003), Esthetic Paradise (Sala Beckett – Festival Grec, 2004), The Speaking Machine (a production that she also directed at the Sala Beckett, 2007, and at the Sala PIM in Milan, 2008), El meu avi no va anar a Cuba (Festival Grec – Sala Beckett, 2008), La marca preferida de las hermanas Clausman (Teatre Tantarantana, 2010) and Boys don’t Cry (Teatre Tantaranta, 2012).