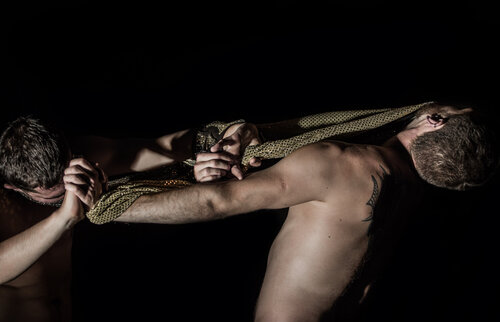 L’età dell’horror / The Age of Horror is a discourse on fear stemming from autobiographical suggestions connected to today’s reality. The key to understand this project is the title, which is based on a pun. L’età dell’horror in fact in Italian sounds like “l’età dell’oro”, which means the golden age. L’età dell’horror is therefore based on the contrast between the concept of harmony, stability and prosperity which the mythological expression the Golden Age refers to and the feeling of horror, understood not as a cinematic genre but as a mixture of disgust and fear. In L’età dell’horror two men move in an empty space, constantly holding each other’s hands. The unstoppable and nervous rhythms of Johann Sebastian Bach’s The Art of Fugue push them to wiggle out of each other as a relentless countdown. They will try to escape from each other, sometimes they will fall but gradually they will learn how to live together at last finding shelter in each other’s body. From a state of disharmony and conflict the two protagonists will find, through negotiation and cooperation with the other, the solution to isolation and rejection fear provokes. The “other”, from something unknown and dangerous, transforms into an aid, an ally, a shelter through movement, space and time. L’età dell’horror is a “declaration of dependence”.

Riccardo Buscarini trained at Accademia Domenichino da Piacenza/IT and London Contemporary Dance School where he graduated in 2009. Highlights of his career so far include winning The Place Prize 2013 with the piece Athletes, the participation in the international research projects danceWEB (Impulstanz, Vienna), Creatives in Residence at The Hospital Club (London), ArtsCross London 2013 (UK, Taiwan and China), Performing Gender (Italy, Croatia, Spain, the Netherlands), MAM-Maroc Artist Meeting in Marrakech. His work in the visual arts field include collaborations with Summerhall (Edinburgh), London Festival of Architecture (2016 and 2019), and with London gallery Nahmad Projects during the exhibition i’m NOT tino sehgal curated by Francesco Bonami and miart - fiera di arte moderna e contemporanea di Milano 2017. Silk, his Golden Mask 2018 double-nominated creation on Chelyabinsk Contemporary Dance Theater (Russia) has been restaged at ZfinMalta, the National Dance Company of Malta in autumn 2019. In 2020 is one of the choreographers of EDGE (The Place, London). Riccardo has approached opera direction working on traditional and new compositions. He has assisted Giuseppina Campolonghi, Italo Nunziata and Leonardo Lidi at Teatro Municipale (Piacenza), Teatro Pavarotti (Modena) and Teatro Valli (Reggio Emilia), Italy. 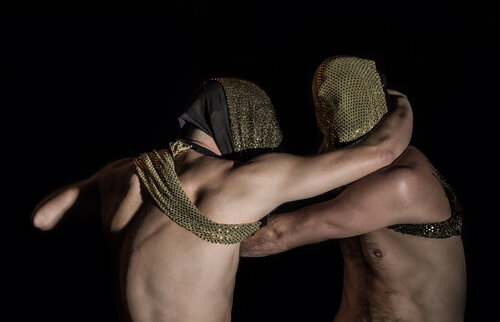