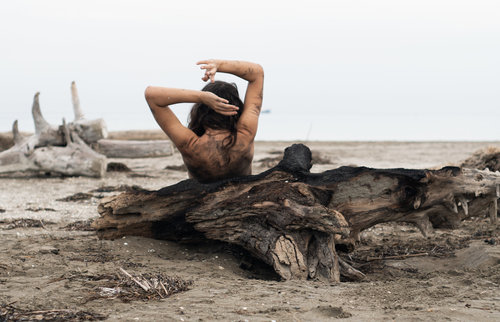 Detached from some storm, uprooted, the trees have sailed. It is the first prodigy of wood, floating. Our human species has been able to explore the planet, to know it, thanks to the wood that knows how to navigate. Otherwise we had to wait for aviation.
Erri de Luca

From this material that bears the history of the sea, origins the desire of the artist to reveal the body that gets in contact with it. Wood is a living material able to inform human body of its history; which in turns gets collected and re-told, in a continuous dynamic exchange between order and chaos. The project was selected by Kelim Choreography Center and will be presented in preview next May at March Hare di Bat Yam Festival (Tel Aviv).